You let about 14 rip a day—and you secretly like the smell of your own (or at least you don’t mind it).

There are more than 100 ways to say you farted

Before doth protest too much, that’s a completely normal number of farts for most people. Maybe you like to eat beans, Brussels sprouts, or bran—all notorious gas producers

Blame the stank on sulfur

Most of the gas you expel is an odorless mix of vapors—carbon dioxide, oxygen, nitrogen, hydrogen, and sometimes methane. But when bacteria in your large intestine acts on carbohydrates (like sugar, starches, and fiber) that aren’t absorbed in the small intestine or stomach, it also releases a small amount of sulfur compounds. That teeny bit emits a big stinky stank. No doubt as least one of those doozies will escape in the company of others. 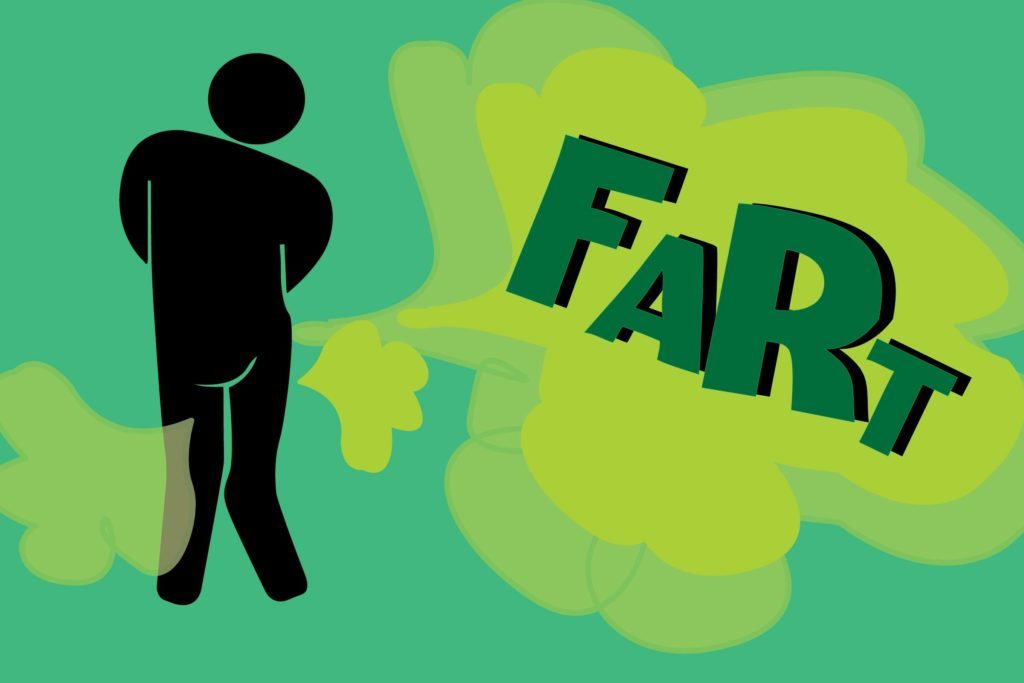 You can buy fart-filtering undies…

Yup, it’s a thing now. A company in the UK designed these boxers and briefs with an activated carbon back panel that supposedly absorbs all flatulence odors. A quick search on a big shopping site found another version: disposable carbon pads that you strategically stick on your underwear or pants to neutralize smells. As wacky as it sounds, there’s a little science, ahem, behind it: a  study published in The American Journal of Gastroenterology found briefs made from carbon fiber are effective at absorbing rectal gases, and pads remove up to 77 percent of the odor.

Because of course there’s an app for that. Oddly, there are many, many apps that recreate the sounds of flatulence. Your own, however, depends on a few factors: the speed at which the gas is expelled from your body, and the tightness of your sphincter—or butthole—muscles.

Consider this a double-whammy for intestinal gas: The mere act of chewing the gum causes you to swallow more air. Sometimes you’ll burp it out; other times it’ll work its way down into your intestines and out the other end. Plus, those minty sticks are artificially sweetened with sorbitol, xylitol, or other types of sugar alcohols that your body can’t absorb. As these indigestible sugars are broken down, gas is produced, bloating occurs, and farting ensues. Sugar-free cookies, candies, and ice cream are no better. Overdo it on sugar alcohols, and you can add diarrhea to the list of no-fun effects. GI docs avoid artificial sweeteners for this exact reason;

So does flying on airplanes

There’s a scientific name for this awful phenomenon: HAFE, or High Altitude Flatus Expulsion—a term use by researchers who found that mountain climbers fart more at higher altitudes. The same kind of thing may happen on a plane: Changes in cabin pressure can cause air in your intestines to expand, leaving you bloated and gassy. The worst part: About 50 percent of cabin air is recycled, so the stinker will likely linger.

His name is Mr. Methane, and no, we’re not making it up. He bills himself as the world’s only performing flatulist and farts to the tunes of well-known songs. He’s taken his act on TV, and even almost won a German talent show.

…and there’s a Guinness record for whoopee cushions

No, it’s not farting exactly—but it’s the next best thing. The most whoopee cushions sat on in one minute is 84 and was achieved by a British man in September 2015.

Some people are sexually aroused by farts

The term for it is eproctophilia, and feel free to file it under “to each his own.” In other somewhat surprising news, research suggests that dropping a bomb during sex many not kill the mood. A survey from the University of California San Francisco-East Bay found 43 percent of women reported that they’d experienced “flatal incontinence” within the previous three months, but it didn’t stop them from having sex.

Go ahead: Admit that you like the smell of your own gas

You’re so not alone, and science can help explain why: Simply put, “the more familiar you are with something, whether it be a song, picture, or even a smell, the more likely you are to prefer it.

And the bacteria in your body that makes your breath, sweat, and fart that smells gross to others is unique, familiar, and not-at-all gross to us

« How to Mix Coconut Oil and Baking Soda for a Face-Cleaning Like You’ve Never Had Before
How to avoid pregnancy without using condoms 5 easy ways! »